That's what this admittedly depressing site is going to try to do. Remind these people that hatred does have a price. You don't get to go around proclaiming "Protect the Children!", while contributing to their deaths.

* These groups are listed as hate groups by the SPLC. 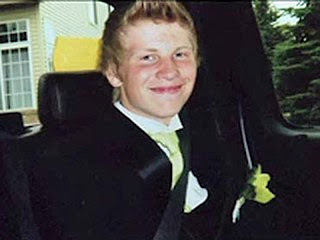 Meet Justin Aaberg.  Justin was 15 years old when he hung himself in his bedroom last July.

From the CBS story (since removed):


"Behind that big smile and lots of friends was a shy, loyal 15-year-old boy who loved to play the cello. Justin Aaberg came out as gay when he was 13 and, as his mom found out only after he hanged himself, suffered tremendously inside.

In the weeks since she found her son dead in his room on July 9, Tammy Aaberg has heard from many of her son's friends at Anoka High School. They told her Justin Aaberg had been bullied and had recently broken up with his boyfriend.

Those same students also opened up about their own experiences, telling her they feel harassed and unsafe as gay and lesbian students.

"These kids, they just hate themselves. They literally feel like they want to die. So many kids are telling me this," said Tammy Aaberg, fighting tears."

From this story:
A gay former student and the mother of a teen who committed suicide last year will deliver on Monday more than 12,000 online signatures to the Anoka-Hennepin School Board to protest the school district's sexual orientation curriculum policy.


The policy states that sexual orientation topics aren't part of the curriculum, and it instructs teachers to remain neutral if the subject comes up in class.

But gay rights advocates, along with parents of students who have been bullied, say the policy more resembles a gag order for teachers and staff. They argue the policy contributes to a hostile atmosphere for gay students because it prevents teachers from validating students' identity and doesn't allow teachers to fully support gay students who are bullied.